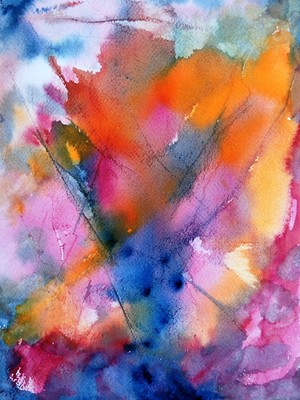 I begin a painting with a color and a process for making paint move; maybe spattering Cadmium Orange over a wet surface, or dragging Prussian Blue with an expired credit card, or making a mark of Yellow Ochre with a brush. Then I trust my intuition and training to guide the work, intruding consciously only to ensure that the finished work displays movement, contrast, depth, and coherence.

I once watched as a woman explored one of my paintings. She turned to me and said, “I love it. There is something interesting going on everywhere I look.” I like that, and so have no remorse about not having a consistent style and not caring about focal points.

P.S. She bought the painting.
www.dickrichardsart.com

In Search of Mushin 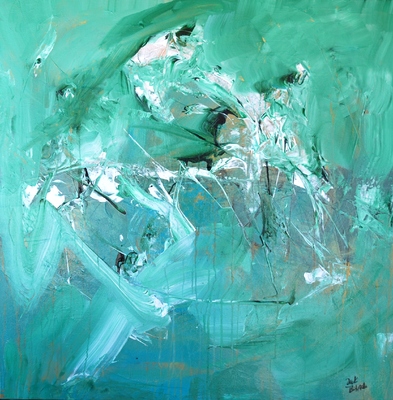 “Be present. Let go. Disappear.” It is a kind of mantra that I repeat when beginning a painting, and sometimes during the process. It is a reminder to enter into and remain in a particular state of mind, to get into the “zone” that produces my best work. I had a difficult time describing that zone until a friend said, “You must have been in a state of “no mind” to create such an evocative work.” I embarked on a search to understand what he meant by “no mind.” I discovered “mushin.”

Mushin is a Japanese term, translating to English “no mind.” It refers to a mental state which martial artists enter into during combat. The term is a shortened version of “mushin no shin,” a Zen term meaning “the mind without a mind." Mushin is achieved when a person's mind is free from thoughts of anger, fear, or ego during combat or everyday life. There is an absence of discursive thought and judgment, so the person is totally free to act and react towards an opponent without hesitation and without disturbance from such thoughts. At this point, a person relies not on what they think should be the next move, but what is their trained natural reaction (or instinct) or what is felt intuitively.

That is a good description of the state I seek when painting, except for the term "opponent." I do not see the canvas in front of me as an opponent, although sometimes my relationship with it is a conversation and sometimes it is a war.

Legendary Zen master Takuan Sōhō explains that martial arts are not the only path to achieving mushin. He wrote, :Once mushin is attained through the practice or study of martial arts (although it can be accomplished through other arts or practices that refine the mind and body), the objective is to then attain this same level of complete awareness in other aspects of the practitioner's life.” Like painting!

What Did You Have in Mind?

The question I am asked most often about my art is some version of, “Do you start with something in mind?” My answer is, “Yes, but what I have in mind is probably not what you would expect. It is never an object, person, or place. What I have in mind when I begin is a collection of colors and a process for working with them."

For example, for the painting shown in this post — Burning Bright — I began by opening a jar of gesso and containers of acrylic paint in cadmium orange, indian yellow, prussian blue, and raw umber. I also laid out the tools I expected to use; a bowl of water, a two-inch brush, and a palette knife. Then I went to work, applying paint to canvas with the brush, moving it, blending it, and scraping it with the palette knife. I tried to do this in an intuitive, spontaneous way. Sometimes I repeat over and over, “Be present. Let go. Disappear.”

For this kind of painting, a purely abstract work, it is imperative that I have no subject in mind — no reality at all. When I began painting in this way, reality would occasionally intrude in the process. I recall one painting in particular when that happened. The painting began looking like surf breaking over rocks. Without thinking about it too very much, I began trying to make it look even more like surf breaking over rocks. The result was a terrible painting. Reality intruded and I lost my way, lost the intuitive, spontaneous sense that I now work to cultivate. I began trying to make a “picture” rather than an abstract painting.

Listen to the Music 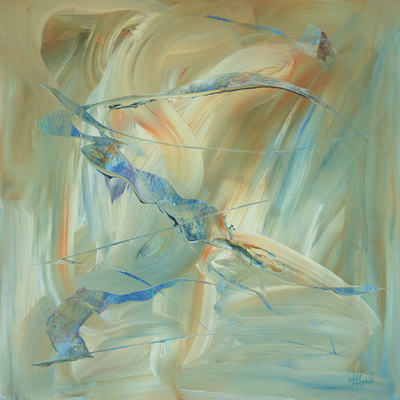 When I began painting in the abstract I had no real sense of the relationship between what I was doing and the artistry of musicians, jazz musicians in particular. I am no musician. Oh, I flirted with percussion many years ago and even attended a week long drumming workshop with African drum master Babatunde Olatunji. The only remnant of that experience is an African drum -- a junjun -- which sits forlornly in a corner of my office. I do tap out a tune on a table top or steering wheel now and then, but that is the extent of my musicality.

During my first attempts at painting in the abstract I listened to the music of favorite popular recording artists as I worked. Springsteen, Willie Nelson, Paul Simon. I listened to classical music as well – Smetana’s Die Moldau was a particular favorite. Ladysmith’s African vocals were on my playlist. Listening to music helped to inhibit the intrusion of thought in the painting process and encouraged a kind of flow. I was also watching video of Dutch painter who is a jazz saxophonist. He makes explicit the relationship between abstract painting and jazz, saying that both are about capturing a moment. The kinship between music and abstract painting was becoming more obvious to me.

I soon began to experience myself as an orchestra conductor as I worked. Each brushstroke or sweep of my palette knife seemed to call for a complementary measure of music; a delicate passage here, a crescendo there. There was no thought to this process; it was as if musical piece I was listening to called for expression, and my job was to give life to it. But, of course, it was all in the paint, the colors and shapes. That way of experiencing myself encouraged bold strokes and a spontaneity that I had not engaged in before. It brought a whole new style to my work. The painting shown here – Listen to the Music – is the first that emerged in that style. Several more paintings followed.

I have often been reminded that Wassily Kandinsky, often referred to as the father of abstract art, saw colors when he listened to music and heard music when he painted. He experienced synesthesia, a condition in which one sense triggers another. It is not that way for me and likely never will be, but I will continue to explore the synergy between my painting practice and its musical counterpart.
_________________________________

The painting is "Listen to the Music." Details HERE

I Talk To My Paintings

I occasionally speak out loud to a painting in progress. Usually I ask a question, something like, “What do you want?” Or, if the painting is not responding to my questions, I will utter a frustrated, “Talk to me. Talk to me.” When I behave this way in the studio where I paint with other artists, they are much amused. Once I was introduced to a visitor in the studio by, “This is Dick. He paints abstract acrylics. And he talks to his paintings.” Be careful what you become known for.

There is, however, method to my seeming madness. Many years ago a man who studied linguistics pointed out to me that the subject-verb-object structure of the English language imposed on the consciousness of its user the notion that the subject is in charge. For example, the sentence, “I am making a painting,” suggests that the painting is a passive recipient of my artistic ministrations, that I am in charge, the boss of the proceedings, the one who knows what is needed and how to do it. Those of us who speak English (and many other languages as well) think that way about a lot of things. The subject-verb-object structure is an invitation for ego – the big “I” – to join in whatever we are doing.

My linguistics mentor also told me that there were other language structures. For example, he said that in the language of the Native American Hopi there was no way to say, “I am making a painting.” In Hopi, I was told, the construction would be something like, “The painting is making.” In that way of thinking, I am an instrument of the painting’s making itself rather than its author. This is a whole different brand of consciousness from the one I habitually inhabit.

That brand of consciousness is attractive to me because my best paintings come from a mental space where “I” don’t seem to matter, where I am not “self” conscious. In that space there is little or none of the sense that, “I am making a painting.” Direction seems to come from someplace that is not me. I cannot say where that direction comes from. Does the painting “speak” to me? Does some muse whisper in my ear when “I” resigns from its lofty position? The answers to questions such as those seem beyond my understanding, and I am not sure that the answers even matter so long as I know how to get into and inhabit that very liberating space for a while.

An Occurrence of Light

A little over a year ago I set out to discover if I could bring the intuitive mindset that produced many successful abstract acrylic paintings to working with watercolor. At first, I produced many bad paintings. As I became more comfortable with the medium, I also became free to do what I had learned to do when working with acrylics: be present, let go, disappear, trust my intuition and training, and paint.